Once upon a time there were two Herdwick sheep named Jemima and Beatrix.  They lived in a lovely field in the Peak District surrounded by drystone walls and full of rich juicy grass. 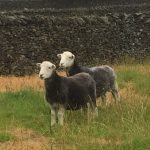 Our Herdwick sheep, Jemima and Beatrix

They had recently moved to this field from another part of the Peak District where they lived with their mother and father, brothers and sisters, aunts and uncles and cousins high on the fells.  They had recently been asked to help out a family to graze their field in the lowlands and had been specially chosen for this task.

“Now my dears” said their mother on the day they left, “you have been specially chosen to help out a family in need and will be looked after and treated well, with lots of rich grass to eat and you will have each other for company.  You must behave and do what you are told and never stray out of the field as this will cause trouble for the family with the farmers in the village.”

Jemima and Beatrix were so excited about their adventure to another field, that they barely took notice of what their mother was saying, and couldn’t possibly think why they would want to stray out of the field anyway, particularly if there was lots of juicy grass to eat!

Their arrival in the lowland village of Litton caused lots of attention. Never before had the villagers seen such pretty sheep with lovely dark grey wool.  All the local sheep were mainly white with not so pretty faces.  Jemima and Beatrix enjoyed the attention and soon settled into their new home.

They had lots of rich juicy grass and were offered sheep nuts every day from their owners, although they didn’t always want the nuts as it was too much trouble to walk down the field to the bucket.   “Let’s not bother today” Beatrix would say to Jemima.  They were becoming very lazy sheep.

A few weeks went by when one day Beatrix turned to Jemima and said “Shall we take a stroll around the fields to see whether we can make some friends with the other sheep.  I’m bored of this field now and want to have some fun”. Jemima was reluctant to do this, remembering what their mother had told them.  “Baa” said Beatrix, “the farmers won’t mind two more sheep in their fields”.

Beatrix was the first to jump over the drystone wall, “Easy”, she laughed, as she disappeared into next door’s field.  “Oh, I’m sure mother wouldn’t approve of this” said Jemima as she cautiously clambered over the wall, knocking a few stones out as she went.

“Not much happening here and very poor grass” said Beatrix, as she looked around the field, “let’s jump the next wall into Farmer Gregory’s field.  There’s sure to be something happening there and plenty of good grass.”  So, both girls clambered over the wall, again, knocking stones as they went.  “Ah, this is much better” said Beatrix, as the lovely smell of cows and other sheep drifted across from the barns.  “Let’s stay here a while” she said.  “Farmer Gregory won’t mind us visiting for a few hours”.

A while later, Beatrix and Jemima could hear talking and shouting from their home field and looked up and stared at their owners in the distance.  They were obviously looking for them, but neither Beatrix or Jemima made any remark and carried on eating.  They decided to move to the very far corner of the field, however, Farmer Gregory had caught sight of them and came strolling towards them, not looking very pleased.  Jemima and Beatrix ran towards their home, climbed over the two walls, and safely landed in their field, feeling very pleased with their escape.   “Ooh how exciting” said Beatrix.  “We must do this every day from now on” she said.

Jemima was worried.  She felt lonely with just Beatrix for company and now that they had been naughty, she fretted about whether their owners would want to keep them and what would happen to them.  She had heard her mother tell stories about friends and family who had been enticed with the bucket and loaded into the big trailer and never seen again.

The next day the owners came out with the bucket of sheep nuts and began walking towards Jemima and Beatrix.  The girls took fright, remembering the story that their mother had told them, and quickly climbed the walls into the next field and again into Farmer Gregory’s field.  “Let’s run away” said Beatrix.  “Yes, let’s go” said Jemima very bravely, and both girls ran through the gate and straight into the safety of Farmer Gregory’s barn.

The barn doors shut behind them and the two farmers, the farmer’s  son and the farmer’s wife ushered them gently into a sheep pen.  “We’ve caught you now” said Farmer Gregory, smiling at them kindly.   Then Jemima and Beatrix overhead a conversation between the farmer and his wife “they need to go to a new home” said the farmer’s wife, “where they can’t escape and can be with other sheep”, she said.  Oh dear, what will happen to us now, thought Jemima.

Later that afternoon, Jemima and Beatrix were ushered into a big trailer being pulled by a kindly man – they were going to a new home high on the hills of the Peak District.  They pulled out of the barn and passed their field.  As they were driving away, their owners waved to them smiling and said goodbye.  “Goodbye” said Jemima, “Goodbye” said Beatrix.  “Sorry we were naughty” they both said.

So that is the story of two naughty Herdwicks – but they were not so very naughty after all because they were only doing what Herdwick sheep should do.  They were not meant to live in one field on their own, and their new home gave them plenty of space to run and play on the hilltops of the Peak District where they lived amongst lots of other friendly sheep, and everyone said that they were the prettiest sheep in the flock.